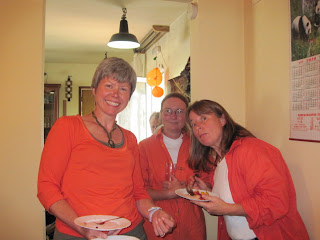 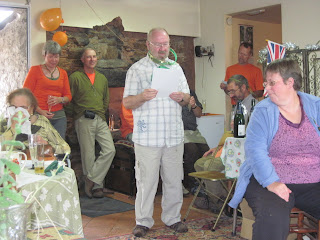 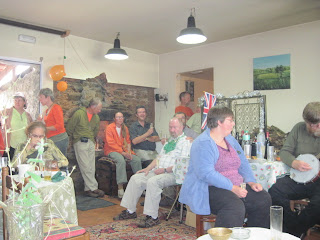 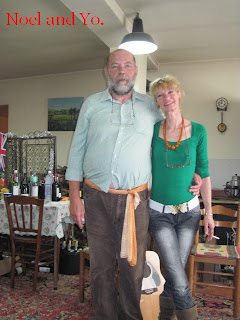 This post is somewhat late, things have been rather busy since we left Galicia for pastures new. We were sad to leave our friends, but not too sorry to bid farewell to Spain. Life is never easy in a foreign country, especially one that has so many different languages and we never got to grips with Gallego which is what our neighbours all spoke, but we muddled through.
The farewell bash, arranged by our friends was great, hosted by Noel and Yo who opened up their house to all, Lisa was the general coordinator, and she did a brilliant job. Every one entered into the spirit of the thing by dressing up in the national Irish colours, even some of the food was was Irish coloured. So thanks to you all. We are now looking forward to October when we will have the first of our friends from Galicia coming for a visit, we miss you guys!
The move it's self did not go according to plan, the journey should have taken just two days,however that turned into over five days. Unfortunately the vets in Lugo had never done pet passports before, and did just about everything wrong that they could, although the procedure had been carried out to the letter, none of the paperwork had been entered into the passports, they even gave the wrong parasite treatment.All this resulted in a three day delay in Roscoff while a fantastic French vet sorted it all out for us. On the upside, if you have to be stranded somewhere I can think of far worse places than Roscoff, it is a very pretty place and the food in the restaurants is fantastic, we hope to return one day for a holiday there.The animals all took the delay very well and were not too stressed, I wish I could say the same about the humans.
So now we are in our new home and slowly getting things unpacked, there is always so much to organise when you move, however we now have a wood burning range installed, this does both the cooking hot water and central heating. The attic space has now been insulated with 300 mms of insulation, and both the plumber and the insulation company turned up on time! The poly-tunnel should be arriving this coming week, and the sun-room and wardrobes are all on order, and the first load of turf has arrived, so all in all things are fairly organised,Oh yes, the kitchen tiling has been done by Simon, and the garden is looking like a garden, we even had a few raspberries and the potatoes are ready for lifting. It's wonderful not to have to fight against the mice and Colorado beetle. So what do we miss? Our friends, but that's it, life is once again simple.
Posted by Renovation in Galicia at 11:47 No comments: