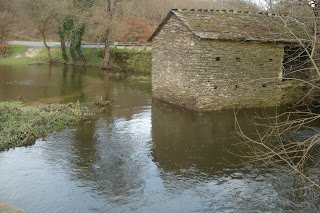 To say the weather is changeable is an understatement, Thursday we had nearly two inches of rain, Friday was bright dry and sunny, Saturday a bad storm was predicted, cyclone Cynthia, but luckily we only got the tail end of it and the only damage was to one of our chimney pipes, we do know that other parts of Spain were not so lucky.
Our latest helper is making a fantastic job of pointing in the old barn which one day is to become a bedroom, but work on the garden is not possible at the moment as the ground is too wet.
We are rather upset to find that our Mimosa tree so lovingly planted two years ago is dead, eaten by some underground critter, probably the same one that destroyed two of our kiwi's. we have no idea what it is, but it sure doesn't respect tree roots.
We made a detour on our way back from Lugo to have a look at the river, well it is hard to remember which is river and which is fields, the only clue is buildings sat in the middle of the torrent, normally there is a foot path there.
The primroses are now out, so it cant have been that bad a winter, although it does depend on which neighbour you speak to, one says this is normal, well maybe, we've only been here three years and it's not been like the first two, another one says it's the wettest for forty years, and yet another says it's been colder than normal, now I'm sure that's not true, we have had very little snow this year, but we have had a lot of wind and some very cold nights, maybe it's because the winter has been a long one this year, and we didn't get the really warm weather in Feb.
Posted by Renovation in Galicia at 16:18 No comments: