When we first moved to Spain we came with our original vehicle, our insurance from Ireland covered us for six months, we had intended to keep this Nissan Urvan , but as it was a commercial vehicle ,re- registering it would have been a long and expensive procedure, so we decided it would be best to buy a Spanish registered car, we asked around to find a garage who had a good reputation, found the car that we needed and the garage arranged the transfer of ownership and the insurance, which although was higher than we were used to didn't seem too bad, the following year we found that the premiums had increased considerably so went to our local 'gestoria' he was an agent for several companies and got us a good deal.
Then we moved to Galicia and although we had informed the 'gestoria' of this fact several times we have never received updated insurance details showing our new address, although we had contacted the company directly, we were told we had to go through the 'gestoria', so it was the never ending circle.
Now the insurance is due for renewal the beginning of Sept and our bank had informed us that they were now doing car insurance, so we asked then to give us a quote, this took a week to arrive and when we had stopped laughing, we thanked them and said NO THANKS! It was 120% higher than we had been paying. So we did what sensible people do and asked the other Brits in the area, we were given the name of three company's, one of which we tried to get a quote on line, after half an hour of filling forms the reply came up that we would have to phone them, so we did and were told that they would phone us back with an English speaker, well ,we are still waiting, however, as we always go into Lugo on a Friday we popped into one of the other recommended agencies, although she spoke no English and our Spanish is not good, within five minutes she had the quote, it has better coverage than we had before and was forty euros cheaper! We left with a smile on our faces, and celebrated with a cup of coffee. We are now pondering as to why the bank quote should have been 150% more, or is this going towards the Fat Cats bonuses ?
The one thing we have learnt living in Spain is always to asked around, normally within the Brit community after all, we all face the same problems and someone will have the answers.
Posted by Renovation in Galicia at 02:53 1 comment: 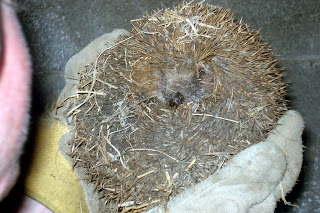 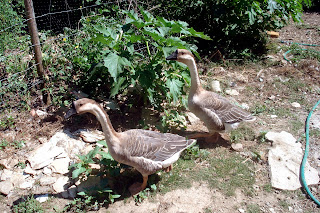 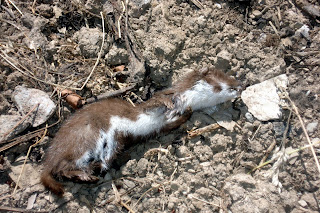 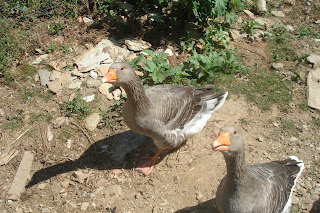 Being 'Organic' brings many beneficial animals and insects, however it also brings unwanted guests, our latest friend is Mrs tiggywinkle, a hedgehog who moved into our big barn, to give birth we think, the unwelcome visitor was a Stoat! Now, as anyone who keep poultry will tell you, as pretty as they might be, you dont want them, fortunately one of the cats had killed this young one that we found, but there must be others around, last year we had a problem with Pine Martens, and we lost three broods of chicks. Our rabbits should be safe enough as they are housed where the dogs sleep, but the hens are very vulnerable, especially the chicks, we now have four more chicks from the incubator, two black and two blond, we are hoping that there is a colour link to the sex and the the black ones are female, we shall have to wait and see.

We have now set the first batch of quails eggs in the incubator, although we had to go back twice to the agricultural suppliers to get the females that we required, the man had a very strange way of sexing them, he looked into their eyes! in the end I had to show him the males foam ball, I do suspect he had a surplus of males and thought he could palm them off to the stupid Brits.
Colorado beetles will always be a problem, as will mice, who nibble the potatoes, as do mole crickets, they also eat any roots of young plants, moles are a menace as well. We have found that the second lot of potatoes planted didn't get either the beetle or blight, we experimented with just using stinging nettle juice and using cut nettles to earth up, we shall rerun this experiment next year to see if it was just a fluke.
Posted by Renovation in Galicia at 08:25 No comments: 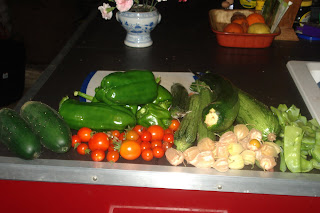 Growing vegetables here is too easy, we seem to have a constant glut of most things, our tomatoes were self seeded and are producing well, the physalis are the plants from last year which I had cut down and left just the stubs in, when I went to pull them up in March I found that they had new shoots so I just let them get on with it, the cucumbers are also self sown, I just transplanted them to another spot, we had grown salsify last year, that also has self seeded, and in fact looks though it might take over the vegetable garden, this of course appeared after we had planted scorzonera! We have for the first time got some pears, the trees had been neglected for years, so last year we attacked them and they have rewarded us with fruit, I must look up the correct way to care for them.
Our last helpers left last Friday, they were a great couple from Texas, they did a vast amount of weeding, chainsawing wood and lifted all our potatoes, so many thank guys. 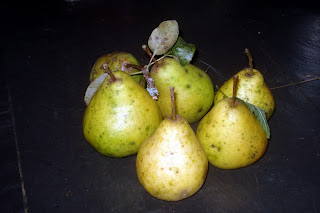 Posted by Renovation in Galicia at 07:37 No comments: