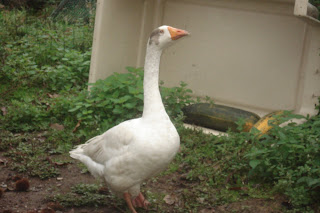 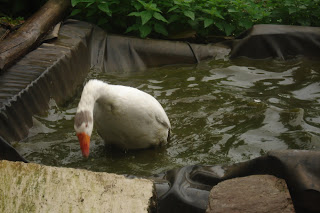 Last January we lost our gander, as readers of our blog will know this turned into quite a saga, well the story continues. Two months ago we were having our doubts as to whether the new ganders were in fact ganders,a hint was the fact that they appeared to be laying eggs, well at least they were sitting on eggs but it's not unknown for ganders to do this while the females go out to feed, we had however set eggs in the incubator as well, nothing happened!! We had also seen the original geese trying to mate the 'ganders' in the pond, something was clearly amiss. We decided that we would contact the agricultural shop where we had bought all of our geese . As we no longer had a Spanish speaker staying with us we thought it best to email our request, the reply was affimitave, so we followed it up with a phone call to confirm that they could get a gander and that it would be at the shop waiting for us on Monday. In Spain we seem to travel vast distances to get what we need, and the geese are no exception, the shop being some two and a half hours drive away. Well, we arrived at the appointed time to find that the man in the shop knew nothing about it. After Simon had explained with his now vastly improving languge skills[a cross between Castilion Catalan and Galliegan] the man realized that we had in fact traveled a long way and that there were definite arrangements made and he knew exactly whom to phone! Someone somewhere had not passed on the message that the gander should in fact be in Padron, not still running around his field some forty km away, so with the aid of the map, plus an address and a phone number and a very protracted detailed list of directions we continued our journey, this time to the coast. The new gander, and yes, we do think he is a he, was awaiting us. It was by now two fourty five and we had planed to look for tiles for the downstairs loo in Santiago de Compestela, and were also due to go to lunch at three with friends who live an hours drive from Santiago[ in the right direction for us to get home] so the tile hunt was abandoned, a phone call made to our friends to explain what had happened, and a look at the map as Simon was sure we could find a shorter route to our friends house. Nice theory, the map showed a nice road, much shorter than the one we had come by, across the mountains, what however the map didn't show was how windy the road was, and in fact to get ten km nearer our destination you in fact travel twenty km. It would have been a beautiful scenic route if it hadn't been thick cloud and fog on the hills (mountains in our language, over 900 m, about the height of Snowdon).

At sometime in the future we plan to return to this coastal atea as it has great scenery and some interesting Celtic remains and monasteries but this will be for the warmer months.
Posted by Renovation in Galicia at 09:53 2 comments: