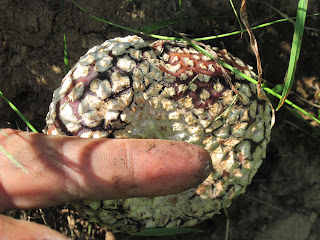 The hay has now been cut and bailed by one of our neighbours, this year we had more than other years but we don't really know why, we totalled two hundred square bales from just under two acres, we only needed ninety bales so the neighbour has the rest in exchange for cutting for us, a good deal all round.
The strawberries keep coming, and yes you can get sick of them, I have made quite a lot of jam and also bottled some of them , we have lost count how many kgs we have given to friends, the raspberries have also been very good and a lot of jam made from those as well.The florence fennel is now ready and we had our first bulb a few days ago, but once again I'm struggling to grow swede after having made two sowings with little result I'm trying again. we aren't to sure how well the potatoes will store this year, we managed to control the colorado beetle with stinging nettle juice but we weren't so luck with the blight, the strange thing is that this is a varity we have grown for the last three years with out too many problems but another varity that we are trying this year has not been affected, we have re-planted some of the saved potatoes from last year in the tunnel hopefully these will crop for us in Nov.So far the maize is looking good despite the best efforts of our geese, and our new chicks are in the new run and doing well.
Posted by Renovation in Galicia at 10:57 No comments: