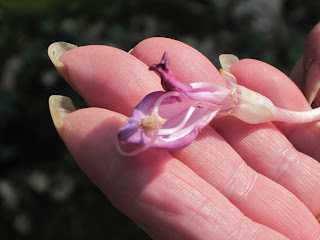 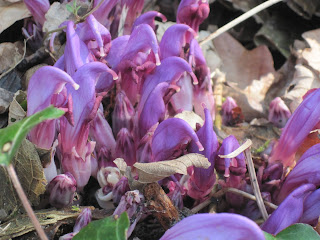 During our three weeks away from Spain we had a few days with relations in the West Country, although my husband is from this area we managed to visit several places that he had never been to including Morwelham Quay in Devon, this had been the most important copper mine in the UK up to the mid 1800's, it is now a living museum and attracts many school parties, the children all dress up in the cloths of the period, and all the staff are also in Victorian dress, it seems a wonderful way to teach children and they all seemed to be enjoying it.
Morwelham Quay was also the setting for the recently aired series 'The Edwardian Farm' in which a group of agricultural archeological historians lived and worked for twelve months recreating life as it was at the turn of the 20th century for a farming and mining community.
On our trip there we stopped of to investigate a lovely river flowing through a small wood in the Taymar valley, it was here that we discovered a plant unknown to either of us although we are avid ditch watchers and plant spotters. Once again we had discovered a plant very rarely seen, Lathraea Clandestina, it is a very pretty plant and highly perfumed it is also a parasitic plant, but does seem to have a number of hosts.
It is very strange still living in what until a month ago was our house, looking at the garden knowing that by now the potatoes would have been planted along with many of our root crops, we are however going back over to Ireland the beginning of May so we should have time to get our new garden started, we are planing to get potatoes, leeks, peas and beans planted as well as carrots and swede, we hope we will be able to find cabbage plants on sale and get them in as well. They should survive not being attended until our final move around the middle of July, after all it is supposed to rain in Ireland, although during our two weeks there in March we had just two damp days.
Posted by Renovation in Galicia at 08:42 No comments: