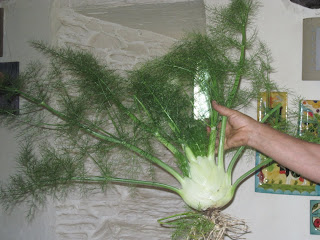 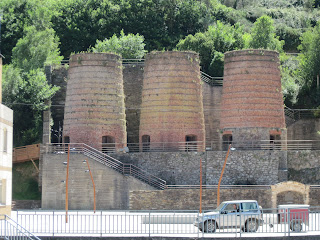 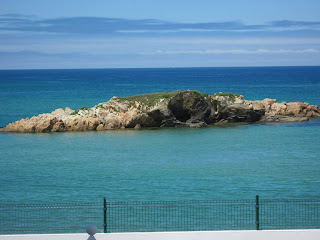 The weather is now very hot, as hot as Catalonia, and to think we moved because of the heat. Sunday we deceided to take a trip to the coast we have never been there in season, the place was crowded, we had hoped to show our helper Rod how beautiful it is, well yes, it is, but far better to go out of season. Still we had an enjoyable day with a picnic overlooking a sea that was so blue, and that evening Rod treated us to a lovely meal out.
Work is rather slow because of the heat, bur wood is being chainsawed ready for the winter, and Simon has built a retaining wall to stop mud coming onto the outside steps. The goats also don't like this weather, and bring themselves back in after a couple of hours outside, which is fine as long as they don't decide to eat any more of our Kiwi's. We should have had a large crop this year but the goats had other ideas, still we still have quite a lot.
I am getting very bored, earlier this year rather enthusiastic digging led to me damaging my Achilles tendon, I have to wait until Sept to have a scan to see how much damage there is, in the meantime I have been told not to walk on it! this would be fine if I had wings but I don't.
I am hoping to find the ingredients to have a go a making soap, this is something I have long wanted to do and have been inspired to have a go by Coco. I have lots of herbs which I could add and as I'm now not able to do the garden maybe I can still produce something.
Posted by Renovation in Galicia at 02:26 No comments:

Posted by Renovation in Galicia at 02:26 No comments: