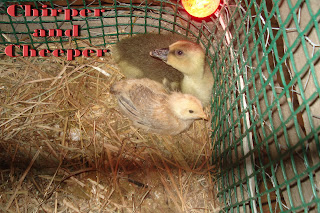 I keep trying to convince myself that spring is just around the corner, the catkins are looking lovely, the willow 's all have their lovely pussy flowers and I have seen primroses out, we even have one very brave anemone out in the garden but the weather is pure rubbish, although we have seen the local deer in the fields and the storks are here, and even the buzzards are calling to each other the weather is the sort that just makes you want to stay in bed or curled up in front of a nice log fire. This time last year I was working in the garden in shorts although we did get cold weather after this, no doubt to prove that I was being complacent about it, this year the winter, although we think has been fairly mild has seemed very long.
We still have no name for the male kid, the name chops has just stuck, the one gosling that hatched has been named chirper, it did seem very lonely on it's own so we gave it a mirror which it cuddled up to, but it didn't seem right that it should have no company so we have bought a chick as a companion, after the initial shock of something else in the brooder that moved, and a few hisses later, { didn't know that goslings could do that so young} the pair of them are now firm friends, we aren't quite sure what will happen when they go into the big wide world and cheeper sees it's mate going for a swim, but it should be an interesting study. I cant see either of these birds ending up as Sunday diner.
Posted by Renovation in Galicia at 10:35 2 comments: