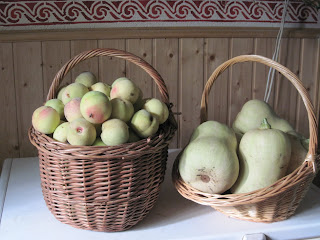 The last month has been very busy, we have had friends from France who we hadn't seen since we left Catalonia staying for a few days so there was a lot of catching up to do, we also had helpers here at the same time, most of my time was spent cooking and exchanging recipes.
We have had a bumper crop of peaches this year but I only had nineteen jars left for bottling so gave friends the rest. We have also had a mass of butternut squashes, so far we have harvested twenty from just two plants and there are at least another six to come providing we don't get any early frosts.
We also have a load of tomatoes, I had hope to be making tomato puree again this year, but have run out of jars, now that we are making our own yoghurt we don't get any jars.
Our maize was disappointing, a number of factors contributed to this, firstly geese attack, then the goats thought they would help themselves and the drought didn't help matters, still they are harvested now and stored away from mice, we hope! The ground has been cleared from weeds and rotorvated and now has been seeded with green manure, a combination of red clover alfalfa and phacelia, we are hoping that the weather is kind to us and we get decent germination, then next spring both the goats and geese can help themselves before we rotorvate it all in.
We will be growing more herbs next year, adding Arnica and Echinacea to our collection, this is thanks to a virtual WORLD BAN on herbal remedies, it is fortunate that I had done a herbal course years ago so will be able to make most of what we would normally use, there are some exceptions, so I guess we will just have to wait and see just how Draconian these bans are going to be.
We have had some rain in the last week, so now is the time for us to go forraging for mushrooms, we are hoping to find more Chanterelles than we did last year, once tasted, never forgotten, just lightly fried in a little butter and black pepper and served with home made bread, wonderful. Of course there other mushroom worth collecting,field mushrooms are good, as are the parasols and the inkcaps, many people use wild mushrooms in various recipes, but to us it seems a shame to loose all that subtle flavour by adding other things to them, unless of course you have a glut of them.
We also have had our first real harvest of walnuts, despite pruning the trees in Feb, which is not the right time,and they bled profusely, they had a second pruning from the council in Aug, which is the correct time, although we lost quite a few of them at this time we still have around seven kgs , enough to last us even though they are one of our favourites, we will be trying the rabbits on the chestnuts, I have couple of recipes to try out, but they are not one of my favourite things, still, we hate waste so will give them a go.
Posted by Renovation in Galicia at 06:59 No comments: