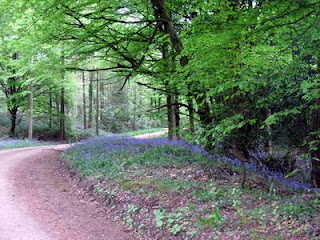 The last two months have flown by. We should have been going to the UK for a week in April,and had spent two weeks or more making sure the garden was OK to leave for a week and to arrange all the animals so they would be easy to look after but, due to a volcano erupting our flight was canceled, our animal/ house sitter was already here, having come four days before our departure to learn about all the animals, who has what, when and so forth, so we took a few days off to show her the area. Fortunately she was willing to return to us a month later, and this time we did get away although the flight was delayed.
This was not a holiday trip, but a trip to clear out my mother in laws cottage which has to be sold to pay for her continuing care in a care home, she is now ninety eight and a grand old lady, but is no longer able to care for herself, it just seems so wrong to me that someone who has worked all their life, and in her case until she was ninety, to own their own home should have to sell their property to pay for care in their final years, whereas someone who has been housed by the state and subsidised by the state, get their care free.
When we arrived on the Monday evening we thought it would be a good idea to go to the cottage to take stock of the task ahead, it was daunting! and even I, the optimist had my doubts as to whether we could really clear out sixty four years of accumulated memorabilia and furniture, I had already contacted various charities and we managed to recycle most things, we thought we were going to have a problem with the piano and chaise lounge fortunately, the postmasters son has just started learning the piano so was thrilled to have it, and his wife loved the chaise longue so these items are still in the village where they have been for over sixty years.
A few items have been put into store, again with help from the village, for us to pick up when we can.
This was my first real trip to the UK in over twenty years, when we escaped Thatcher's Britain and I was agreeably surprised. The people were helpful and polite, everything was so clean and well kept and the food in pubs was first class, the UK does have a food culture, all local, fresh and of first class standard, to say nothing off the real ale which we enjoyed several pints of! We were also surprised at the prices for food in the pubs which worked out about the same as we would pay for a reasonable meal in Spain, but of course, no vegetables in Spain, we dont understand how they stay so healthy and live to ripe old ages if they haven't been killed on the roads.
Posted by Renovation in Galicia at 10:35 No comments: