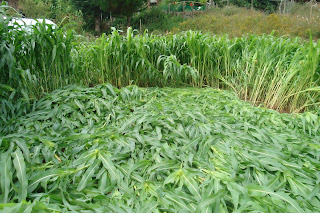 Yesterday we had long awaited heavy rain, the garden needed a good drenching, however, at 4am this morning I was awoken by the sound of funneling wind, I heard things crashing but was not prepared for the sight of our maize crop being flattened, from the sight of the crop it would seem that we had a mini tornado which has flattened the centre of the crop, it remains to be seen if we can do anything about it over the weekend.
Adding insult to injury the wind had blown open the tunnel door, the hens took full advantage of this and decided that dust bathing in the middle of the lettuces was a good idea, so we have to plant
more lettuce, might just eat the hens instead!
Posted by Renovation in Galicia at 11:37 2 comments:

Labels: Disaster and the maize 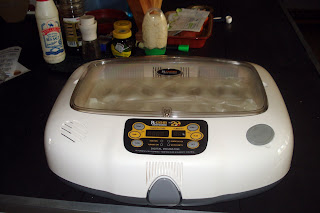 At last the incubator has arrived [ 2nd dispatched one] after a two day stop over in Belgium, and it was delivered to our door! So well done Parcelforce, you managed to deliver where other couriers have feared to tread. It still remains a mystery as to the whereabouts of the first one, all we need now is for the quail to start laying, as we had expected our first eggs by now I think we had better check their sex ourselves, however, we will do a few hens eggs while we are waiting for the quail to start laying.
Posted by Renovation in Galicia at 11:24 No comments:

Labels: End of the SAGA

After numerous emails, lots of stupid questions, and wondering just whose responsibility it is for the safe delivery by courier, the latest update is that the aforesaid item is now in SPAIN! whether it gets to us is another matter, there's 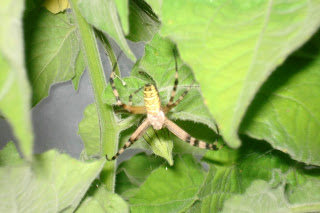 already one incubator that's fallen into a black
hole, just hope this one is luckier.

Thanks to today's rain at last I have managed to get some work done in one of the tunnels, I even found some ripe tomatoes, plus some rather nasty looking spiders, I'm not bothered by spiders, but I did give these a wide ber 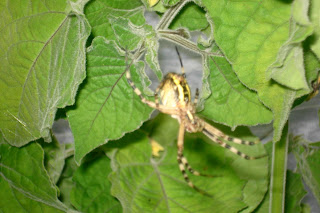 th, Simon however was not impressed ! it's only in the past few weeks that I have found out that he really does not like spiders and we've been married over twenty one year
Posted by Renovation in Galicia at 10:42 No comments:

Labels: continued;, Saga of the incubator
Message for BETTE NOIRE, if you leave another comment it should go to my email address, I can then answer you in full
Posted by Renovation in Galicia at 03:04 1 comment: 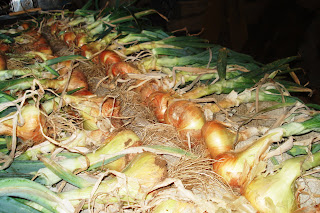 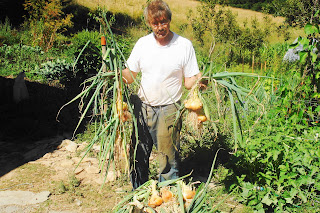 It's RAINING!!! after two months of virtually no rain we are celebrating, watering the veg every other day does not compensate for a good downpour. Perhaps the rain dance done by a friend has worked, not so good for her though, she's still waiting for a new roof.!

Although it means we cant work outside, I can get on with planting and weeding in the tunnels and Simon might get some logs cut.

We had experimented with growing onions in a tunnel this year, they were planted by one of our helpers in Jan, the result has been great with an average weight of 1lb 3oz or in new money 517grams, we have now harvested them and are drying them in a barn before plaiting them, so cheers Simon H.

We had made two further plantings in the garden, but they are no where near as large , but we are hopeful that we wont run out of them this year. i think we might try growing the garlic in a tunnel with the strawberries next year, as it's not done very well outside, maybe the soil was not rich enough.

There is still no sign of the incubator, and appears to be stuck in Belgium.
Posted by Renovation in Galicia at 02:07 1 comment:

Living in Spain can be very frustrating, in some things they are so efficient, but with couriers they are still in the dark ages.
We ordered our incubator from the UK, two reasons really, firstly they are far better quality and with automatic turning and secondly they are cheaper, so the incubator was duly dispatched, five days later we received a phone call to say there was a parcel for us and it had been delivered to the garage in our local village, now maybe there are two villages with the same name and same post code but I dont think so. Unfortunately the person who made the call failed to say which company they were, but the very nice lady in the garage phoned round a few of the couriers, of course, without a tracking number it was rather like looking for the needle in a haystack.
So I then tried to contact the company that I had bought from, only to find it's an 08 number, so not dial-able from Spain, so I had to phone a friend in the UK to get them to phone for me, the end result? no one knows where the parcel is!
So another incubator has been dispatched, and I have been tracking it, it is in Belgium, and the further information is that that was it's final destination, so apparently, Belgium has a place called Spain in it. I doubt it!
What we cant work out is why Spanish couriers are unable to deliver a parcel to the address on the label, we only live 4k from the village, it's not as though this is outer Mongolia, and I'm sure the delivery vehicles must be fitted with GPS. Maybe the drivers are afraid they will be eaten by wolves or attacked by bears or wild boar.
Posted by Renovation in Galicia at 11:25 No comments: