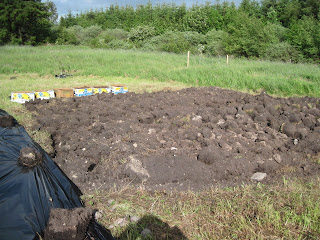 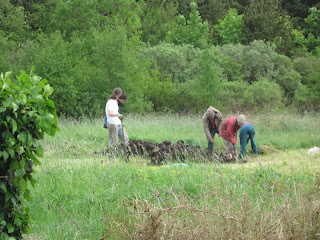 Not everything goes according to plan, we arrived in Ireland after three days travelling to find the the solicitors had not completed on our purchase of the new house, whether it was our side or the vendors I guess we will never know but we arrived with a van load of boxes and plants expecting to be able to move in and get the garden started to find that we were still homeless, our solicitor was away and could not be contacted for a further four days. Fortunately we have a number of friends there so accommodation was not a problem and the seller agreed that we could put our stuff into the cottage which was just as well as the first thing we found was water runner through the once perfect kitchen ceiling. We turned of the mains and had to leave it at that, it has done some damage but nothing we cant sort out when we get back there. We eventually got the keys four days later and set about getting the garden started, a few days later a friend turned up with her son and daughter plus a helpxer and they helped turn the virgin soil for us, we now have seven rows of potatoes planted plus swede carrots and parsnips, I also had some special seed potatoes which I have planted in the boxes we had transported our goods in.We have also planted some apple trees a Victoria plum, raspberries and blackcurrant bushes so we should have some food later on this year.
The area we are moving to abounds with wild life, foxes, of course, we intend keeping poultry, hares, and pheasants, we also have a nightingale who sing during the day as well as at night. Going back to keeping poultry, anyone who reads my blog knows that we have had considerable problems with Pine Martins, this is clearly going to be a problem again as we have one living in our attic. Sat down one evening after a days graft in the garden we heard loud scampering noises from above, certain that we don't have ghosts or lodgers living up there further investigation was called for, this turned out to be a very smelly job, Pine Martins don't use just one spot to shit, this clean up job has been saved for our return. It had made it's self quite at home there and appears to have been in residence some time, possible driven in during the very hard winter when temperatures were 18c below, it's possible that it is this little beast that has also caused the damage to the water pipes . One things for sure, it will be made to vacate the premises as soon as we get back.
Posted by Renovation in Galicia at 05:39 No comments:

Labels: With a little bit of help from our friends. 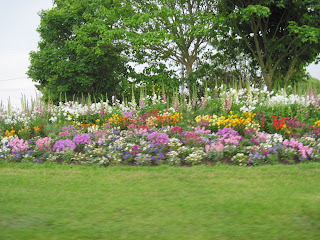 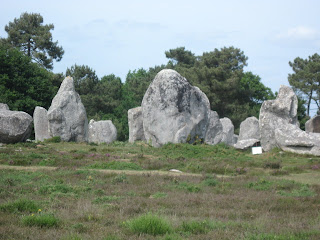 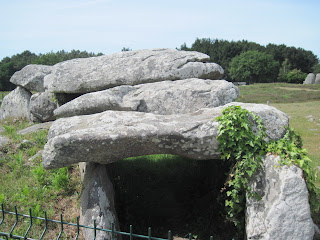 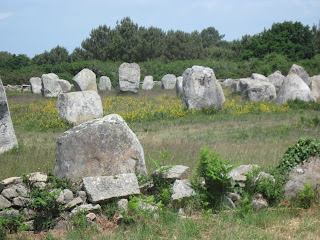 The last three weeks have been interesting and when on several occasions we were asked where we were from we didn't quite know what reply to give, we seem to have done a lot of travelling both on ferry's and road and it became quite hard to remember where we had been and where we were headed.
We had a few days in Brittany on route to Ireland and on our way back. We got to see the standing stones at Carnac. Nothing we had read or seen about them had prepared us for the shear size of the site which stretches some five miles, many theory's have been put forward to their purpose but the fact remains that they are a mystery and are totally awe inspiring, there is no way to describe them and to do justice to them all you can do is to stand back take a deep breath and try to go back in time to some five thousand years BC and marvel.
Brittany is a very beautiful place and the people are so very friendly, the food is fantastic and there is a real sense of civic pride, the towns and villages are clean and well cared for with flowers abounding every where. The local councils seem to prefer the use of wild flowers on both their roundabouts and verges as you enter or exit towns, so much nicer, and environmental friendly than bedding plants.
Posted by Renovation in Galicia at 05:10 No comments: