A new kid is born 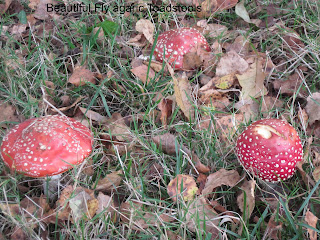 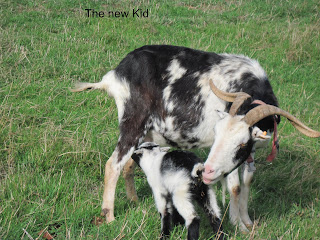 We were trying to reduce our stock, well goats really, however one of our elderly nannies presented us with a beautiful male kid on Sunday, she doesn't have that much milk so once again we are bottle feeding.
Our green manure is now well germinated and growing well, this month[where did it go?] has been very mild and we have had very little rain, the last time we had an October like this we paid for it come the following April when we got snow just as all the fruit trees were coming into bloom, still there seems to be no set weather pattern nowadays so maybe it wont be a repeat performance.
I have had to plant yet more carrots, this time in the tunnel as the mice or voles had devastated our crop, also helping themselves to parsnips.These little pests were something we didn't have to contend with in Ireland which is just as well as part of our income was from veg and herbs, still we have had a few good pickings of wild mushrooms so that's some compensation.
Our friends that came for lunch a couple of weeks ago are now realising that you should never take the word of an estate agent, S is studying for his PHD and one requirement when they were house hunting was internet connection, of course the agent reassured them, pointing out houses that he said had connection, although how he would have know this is somewhat of a mystery, and of course was not true. S and M are now faced with having to pay the best part of 1000 euros to get a satalite connection,added to that they also have to have a new roof although again the agent had reassured them that the roof was sound, in most countries you would employ a surveyor before buying a house, and maybe the Spanish do, but most of the expats don't,and end up with very costly bills, of course, if you are buying a house that seems to be cheap it would follow that you have a lot of work to do, and compared to UK prices houses are still cheap in Spain, but renovating a house, even doing it yourself is a costly past time as we have found out. Although we have built two houses in the past we had not realised just how expensive restoring an old house can be, agents will reassure you that you can do it for X number of euros, but if you double their figure and add another 10% that will bring you somewhere nearer the investment required.
Posted by Renovation in Galicia at 10:01 2 comments: