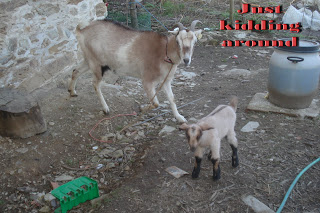 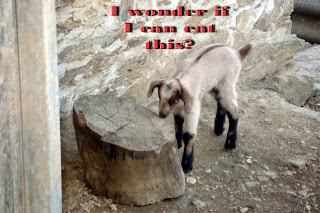 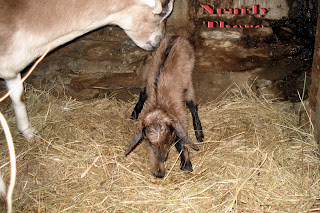 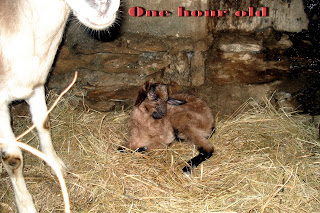 We now have two new arrivals, a male kid born on Tuesday and as yet unnamed, chops doesn't sound quite right, and a gosling has hatched in the incubator, we are waiting to see if anymore hatch, it was a bit of a surprise to us as we had had two power cuts lasting three hours each within the first ten days of setting the eggs.
Now the Billy goat has proven ability the next job is to build a separate stable for him, we dont want too large a number of goats, and one in milk at a time is sufficient. It all makes for extra work and less time that we can spend on the renovation, or even getting a whole day out without feeling guilty.
We have been involved in environmental issues for a number of years and recently saw the film Food,Inc. For anyone who care where their food comes from and how it is produced this film is essential viewing, although an American film it applies to where ever you live, it has been very well received in the US[ surprisingly] and has now been nominated for an Oscar, oh how companies like Monsanto must hate it, the truth, finally out for all to see. On the same subject, well nearly, we have been aware that there are many test sites of GM crops in Galicia, whilst visiting friends last Sunday we noticed two fields that had been growing a certain type of GM maize last year had been planted with winter crops, winter cereal and a fodder crop, these crops look sick! with yellowing and some white leaves and distorted growth, as we knew which variety of GM maize had been in these fields we googled it, and it appears, according to Reuters that there was a EU meeting on July 23rd last year where permission was denied for growing of this variety, it is clear that regulations mean nothing to these companies, this maize would have been planted last May in the full knowledge that it had not been approved. Living in a strange country has many disavantages, not least when you see that EU laws are being broken.
Posted by Renovation in Galicia at 10:32 1 comment: