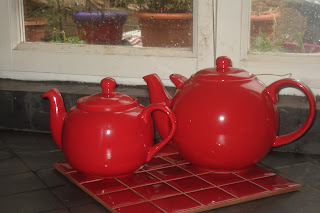 A few weeks ago the spout once again broke off our teapot, this to us is a disaster as we drink a lot of tea, I had mended it on several occasions, the last time using epoxy resin which did the job for a few months, however as this had now failed I considered it time to buy a new teapot. Not a problem if you live in Ireland or the UK, but try finding a teapot in Spain, that does more than two cups, plus I wanted a red one! So online I went, first to M&S no luck then B&H same story and then Argos who did have teapots but only small ones, so I thought lets be really silly and try Amazon, the selection was endless, but all I wanted was a large teapot in red, and I found one, ordered it and it arrived safe and sound, thank goodness for Amazon. I had not mentioned the old pots demise to anyone, so imagine my surprise when I unpacked my birthday present a couple of weeks later, from a friend in Ireland to find .... A large teapot, and yes it is red, and this one is BIG.
The weather is still mild but now it's damp, but it did stay dry enough to get the first veg beds prepared for early planting, and the rhubarb is through and hopefully we will have our first pickings in a couple of weeks.
Our poor lemon tree has an infestation of sooty mould, normally caused by aphids so it will have to be dosed with stinging nettle spray, this will also feed the tree, so double benefits.
The storks have now arrived back from their winter vacation so it feels as though spring in on it's way.
Posted by Renovation in Galicia at 07:55 1 comment: