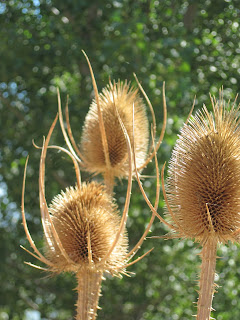 We have now given up trying to obtain GM free feed for the hens and will have to be feed straight grain, in a last ditch attempt to find feed we bought some eggs from an Organic Co-Op here in Galicia, this producer used to produce Organic eggs, now they only produce 'Free Range'due to GMO contamination.
We find certain world leaders have a double standard, the two in question have been the leaders in trying to convince the consumer that GMO's are fine, and in allowing the planting of the crops. both these leaders claim to be Christians, and in fact one, not so long ago converted to Catholicism, we were under the impression that the Christian hand book was the bible, well either these leaders are not familiar with it, or are selective in which parts they wish to abide by.

Jeremiah 2:7 And I brought you into a plentiful land to enjoy its fruits and its good things. But when you came in you defiled my land, and made my heritage an abomination.

"Let the earth bring forth grass, the herb that yields seed, and the fruit tree that yields fruit according to its kind, whose seed is in itself, on the earth" Gen 1:11.

To us, both these verses are clear,so what part of them do these Christians not understand?
Posted by Renovation in Galicia at 10:16 No comments: 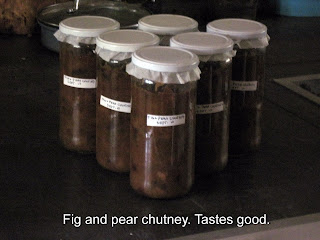 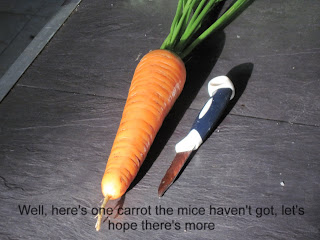 This time of year I always feel as though I have a lot in common with squirrels, I cant stand waste, and was brought up in the post war era when nothing was wasted. String and paper from parcels was always saved for re-use, buttons were always cut off from garments that had reached the end of their days and put in the button box, always a source of delight for kids to play with, the garments themselves became dusters or went to the rag and bone man. This year we have had a bumper crop of pears but not so many plums, I would normally use extra plums for the chutney, but this year it's the pears, which with the figs have been turned into chutney, and it's delicious. Of course I have also bottled pears and we have the peaches to come yet,the pantry is already nearly full.
We have grown two butternut squashes plants this year for the first time, no one warned me that they would take over the garden and that they produce so many squashes, they keep very well, and we should have squashes for the entire winter.
We have drawn a blank in our quest to find Organic feed for our hens or at least GM free feed, we contacted a company advertising Organic feed by email, after a week when they failed to respond we phoned them, they only supply in Cantabria which for us is a ten hour round trip. We then tried contacting the Galician organic certifying body, their email address does not work, neither does their website and when you try to phone it just goes to fax. so, back to plan one, feed the birds with straight grain and make worm banks for the winter protein.In trying to track down non contaminated feed has been interesting, and raises many issues, as Spain grows the most GM crops in the EU, why is animal feed the dearest in Europe? Maybe the answer is simple, according to the US government it is now accepted that GM crops do not produce higher yields, funny, I remember that this was one of the boasts of the GM companies way back in the 90's! Also, according to scientific evidence, GM crops have lower nutritional value resulting in lower weight gains for the animals that are feed with it, and although there has been no control group study carried out, there has been an increase in allergies in humans since the introduction of GM's into the animal feed. Independent research also has found it causes infertility and liver damage in animals.Note the wording, INDEPENDENT! not research carried out by GM companies, who do not make their findings public. There seems to be something very wrong somewhere.
It is also interesting to note that 93% of all patented seeds are owned by one company, I'm not giving any prizes for guessing who that company might be, but a clue,it is one of the companies responsible for the manufacturing of Agent Orange, used during the Vietnam war.
Posted by Renovation in Galicia at 10:19 No comments: