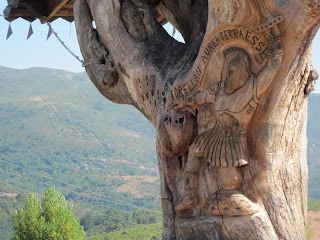 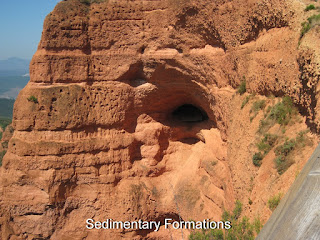 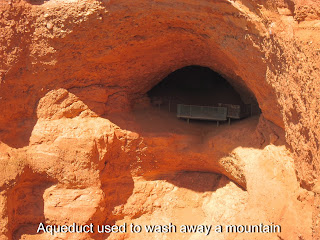 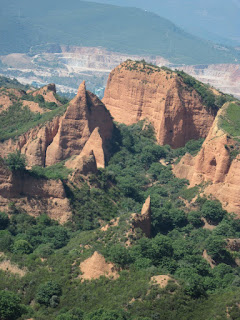 Today was a day off, we went with friends to visit the Roman Gold Mines at Las Medulas, in Leon. The site is Fantastic, covering some 2000ha, with no less than 50 archaeological sites it is an UNESCO World Heritage site. The gold had first been discovered by the Asturs, people indigenous to the area, but then the Romans came. The only problem was how to extract the gold that lay within the mountain rocks. The Romans were incredible engineers and figured the best way to deal with the problem of a few mountains was to wash them away! This was done by means of building aqueducts, or rather enslaving the Asturs to build them, take water from the Sil river and several others, and just wash the problem away. They left the mines in the 3rd century, even though they were still working mines containing gold, the reason is not clear.
Posted by Renovation in Galicia at 11:47 No comments: 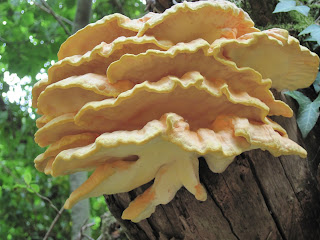 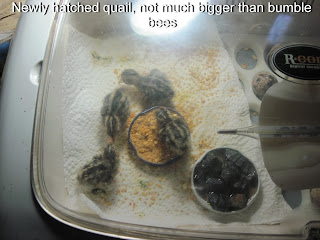 At last we have had a nice drop of rain, it lasted for a couple of hours and has at least cooled things down a bit.
The Autumn raspberries are now starting, and hopefully, will continue to the first frosts.
We have hatched a few quail for the table but it was not a good hatch, the incubator is erratic. We have however found another use for it, Yoghurt. For one reason or another, in Spain, we have not made our own yoghurt, in Ireland we always did, maybe because we always had milking animals, sometime cattle and sometimes goats,and we had a range which was on all the time. Although we still have goats, somehow we have neglected to milk them, too much work on the house. Anyway, inspired by another blog I decided that I would go back to making our own, we have been buying a locally produced organic yoghurt until now, but it is expensive,at 3 euro for 700grams, and I'm sure that the supermarket is making a very good profit from it, more than the producer. Fresh milk is available but no organic fresh, so I thought I would have a go with the Organic UHT that we always buy, one litre for 1.27 plus three desert spoons of the organic yoghurt and four hours in the incubator at 40c and we have just over 1 lt. of organic yoghurt for half the price of 700grams. It turned out lovely and thick, so it's back to making our own.
We spotted a chicken in the woods fungi earlier this week and should have harvested it, but it has reminded us that the mushroom season is nearly here, we now know where to find the Chanterelle mushroom, in our opinion the best of all the fungi, so next week we will start making regular hunts for it. especially if we get a little more rain.
Posted by Renovation in Galicia at 09:03 No comments: