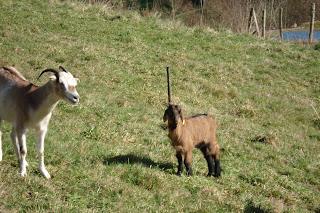 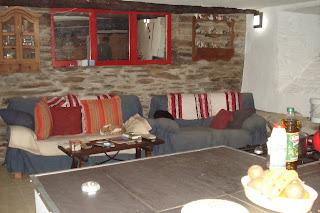 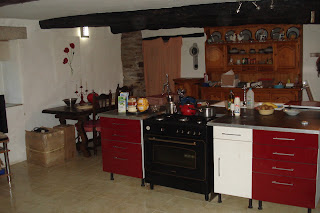 At last we have moved into the new kitchen, two months later than we had hoped but we're in at last.
After having lived and cooked in one room for the last twenty months it's great to have so much space, there is however one problem, having so much cupboard and drawer space! with twenty three drawers and eleven cupboards we count ourselves lucky to find whatever we're looking for in the first twelve spaces, and to think that in the old kitchen we had just three drawer and no cupboards.
The C/H is also up and running so we have managed to keep warm during what the papers say is the worst winter for thirty years.
We still have not completed the new sitting room which is being used to store a lot of stuff, but as the kitchen is so big it's not a big problem.
The weather is now very spring like and at last I have managed to get into the garden and have started planting, so far just the broad beans and mangetout peas, and Joe our current helper has planted the garlic for us.
Joe is a young American , full of energy, and a great worker, he is doing a grand job on digging and lining a drainage trench for us.
We also now have a young billy kid who hopefully will sire some offspring for us, we had hoped to find a stud goat but failed, so thought it best to keep our own.
We are also hopeful that Lucy the rabbit is pregnant, so that should give us rabbit for the table later on in the year.
Posted by Renovation in Galicia at 10:20 No comments: